Watchdog groups: This time around we actually do cop an NGO bullet 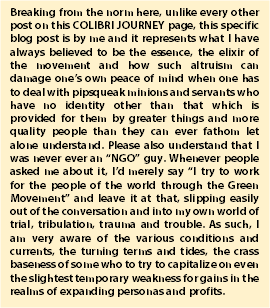 Right between the eyes mind you.

True, the watchdog groups identified 161 issues over three months from April to June. True, they used their phones to optimize their livelihoods. True, they networked with each other and created some mild but organic competition with each other.

But still (a few deep breaths and here goes)…

Look. The Green Movement in not your run-of-the-mill NGO that sells other people’s pain for its personal gain. With every action it takes, it attempts to make that action greater and more lasting by triggering enthusiasm for that specific action towards achieving the dream of a stable future for those most in need of it and that is not grand beneficiaries like the GMSL or ACTED or who-have-you. In that sense, it had never had any problems with getting into debt to make sure people are safe. That is the paramount consideration.

With that rationale uppermost in our minds, with that emotion ingrained deep in our hearts, with that drive powering our hands, we went to war for our peoples regardless of their station in life or their specific geography and we are not simply talking of the tiny space we call Sri Lanka but the whole world. We, more than most, know the world of civil action cannot be trusted to deliver as has already been proven through countless research studies. Yet, we always prided ourselves for being that teeny tiny exception that was never fearful of calling a spade a spade. Or, in more brutally honest words, we don’t call an anus the parliament or vice versa. We just say it as we see it and bread is 360 rupees a pop take it or leave it.

With that sort of warriorism, well, to put it simply, even the smallest aberration of quality in process, the slightest misstep in overall progress, the merest indication of intransigence in effort is something that we, the Greens, will always consider to be a national tragedy to which we, by our own failings, have contributed.

Regarding not that he has incessantly roved through the COLIBRI terrain for almost two full years and understanding that program implementation is fraught with massive dangers, my friend Suranjan (and in no small part my mentor in these matters of social subtleties) immediately saw red flags flying from every COLIBRI signboard and threw himself into figuring out what had happened.

For a man in possession of the practical experience he has, it took him just a few days to figure out what was actually going on. Our field staff, especially our field coordinator (who, by the way, had been with us for yonks) had lied. Remember? In a previous post, we had said that their initial selections were wrong and we got them to redo the whole list of watchdogs? Well! So much for that. Despite our vetting, assertions and confirmations these bunch of losers had still managed to put their “favourites” in by coaching them on how to respond to our interview questions.  Not to put too fine a point on it….? F***!

They had behaved like every deeply deranged NGO louse that we had steered clear of. Manipulating everything from zero to infinity with that level of crudeness that pales my own French into oblivion. Skewering them with his laser vision, my friend Suranjan got it out of them. Got it out of them that their lack of reading of the “GSML-heart”, their lack of understanding of the “GSML-mind”, their lack of valuing the “GMSL phenomenon”, had rendered them less than useless to GMSL or COLIBRI. They had succumbed to the allure of NGO vantage. The free cup of tea, the free betel chew, the free meal, the free pot of coconut toddy, the free produce of hard-pressed workers, the free lodging, the free titillation of women who see the advantage of allowing these apologies for men limited “access” to sweet nothings in exchange for hard COLIBRI somethings.

Soooo, instead of the proud 59, we only have, at best? A meagre 35. Sure we will try to confiscate the phones of the posers and losers and reassign them but the horror of failure at the get-go lies heavy upon our collective hearts. Because a lot of innocent and desperate people suffered. People who looked to us for help in their times of hard, heat and hurt. People innocent of ingrained understanding of how to optimize their personal profits from NGO bullshit. Would you consider that a national tragedy? I personally do not now. BUT WE COLLECTIVELY DO!

The fault is not theirs. The fault lies with us. The leaders, the direction givers, the monitors, the evaluators. We failed. Not them. Let us for a moment forget the fact that we had no monitoring budget. Let us forget that we were working on shoestring remuneration. The onus is not with any of those. It rests with us.

Do we go with the job savers of our field and say “lesson learned” no! Thrice no for crying out loud. Sure, we have done more than anyone would have believed possible in the short time we had to do it and sure we still stand tall for it will take more than this to fell us. But for now, for at least a couple of weeks, we stand in shame.