Let us help each other help the world 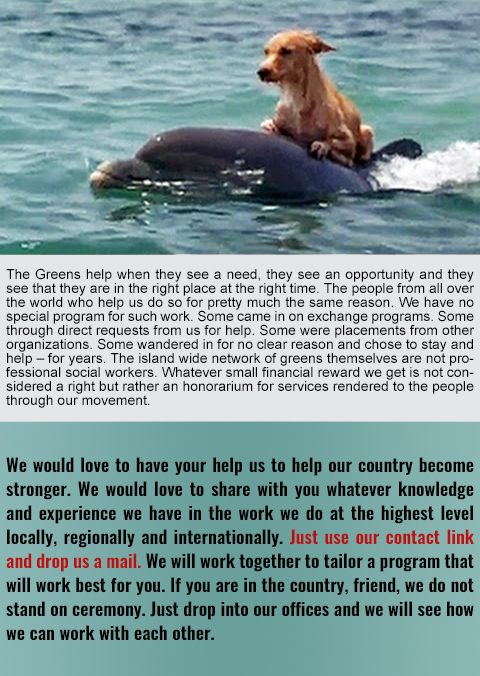 The peopled earth has for four millennia deemed it fit and proper to commandeer individually what has been given into the common use of all. We call it various names. Greed, covetousness, acquisitiveness. To do what those three words imply we must do three other things. We must exploit, we must disenfranchise, we must disempower. The mind set and the approach of those four hundred years is known to all as civilization. Elsewhere on our website we have been very clear that there is nothing good, nothing wholesome, nothing lasting, nothing joyful in such behaviour. We have proven that it is a mere legitimization of things that go against the very grain of life, the very idea of humanness, the very foundation of civility. We do not blame the masses of human beings for now believing that such is part and parcel of their DNA. That was brought about by centuries of manipulation and conditioning. So much so that these days, one will have to search hard to find those who can think past that fog of psychosocial misery, that ungoverned insanity, that conditioned immorality to clear skies and blue waters where the idea of life is not determined by the idea of self and the insistence of positioning that self in the best way possible regardless of actuality.

Those whose lives are enveloped in that bright veneer are called many things. Volunteers is one. Givers is another. Empathisers is a third. We simply call them the helpers and supporters of our world. In our world of action, such women, men, youth, children are the most precious. They are the most respected. They are the most sort. They are in possession of that rare insight that defines the basis for a quality life “Daanaya dena kena gaava pamanayi dhanaya ras vanne” (It is only those who truly give who truly get).

And so it has come to pass in our work in Sri Lanka and elsewhere. Many were the people who volunteered (for want of a word) their hearts and hands to the support of those who needed it. Those who came to our country to help out hailed from all over the world. Denmark, Norway, Sweden, USA, India, Nepal, Japan. Those who we sent out of our country to help out went to India, to Nepal, to Norway, to the USA. All of these helped the world recapture some of the humanity it had lost and the beauty of it all was that they were only vaguely aware of it and considered it not at all. It was just that basic decency that drove them to think, say and act in accordance with the only adage worth repeating in these days of darkness “this that I do has nothing to do with me. It has everything to do with the world”.  That gave them a righteous power that those who hanker after it never acquire. The ability to truthfully claim ownership of the lands that they walk on regardless of where that geography existed. They never wished it but through their work, almost as some unsort collateral perhaps, they in turn acquired massively – knowledge, insight, ability and most importantly, new and improved ways of treading light upon the face of our mother earth.