We show the project lead our work in the field 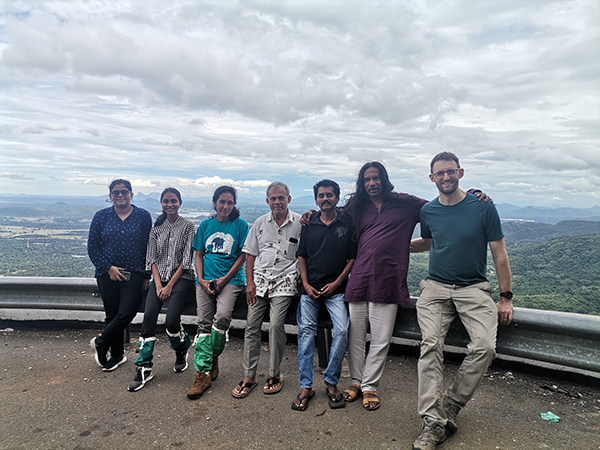 The two teams on the road from Kandy to Mahiyangana

It took some time (almost two years actually) to engineer this but finally Team GMSL hosted a few members of Team ACTED to four days in the terrain we have been working the COLIBRI project. There were a few justifiable concerns regarding the weather and god knows that terrain is tough and in some instances can create dangerous conditions in the wink of an eye. Yet, we took the required precautions and went it with a prayer to the weather gods. Owen, Zeenas, Anjalee and Akshya had, we hope, a heady time visiting some of the work we had done.

Day one was brutal with a 3 am start and a sort of trial by marginal fire in the form of leaches. Lovely critters but a bit of a pain because they marginally disrupt such crazy human ideas like agendas, aims and goals. Anyway, as we always do, we took it in our stride although Sura was particularly badly hit.

We hope the two younglings in the ACTED team got to see a thing or three that they may not have seen before. In any case, as all good partners do, Sura and Arjuna imparted what they could as the circuit unfolded not always related to COLIBRI but sometimes related to life skills, experiences, observations etc.

We were all a bit non-plussed by the preparations done by one Tamil speaking community to give us the grandest welcome – complete with garlands, religious worship and a children’s dance dressed in colourful and beautiful traditional garbs. It was wonderful to watch. Our two youngsters had to be gently reminded to just “go with the flow” and more than once had to be reminded that they were “not in Colombo” and had to take everything given as a communal salute to our efforts.

GMSL has never sufficiently lost its head to be politically correct and emotionally incorrect and when we saw that a given commune was going to be insulted if we paid for say… a meal… we gently let it go without spouting NGO b/s such as “pay for everything you get from your beneficiaries”. Yes we will if we know they are trying to curry favour but no we won’t if we see that 10 people in the community got together to give us a cracking good meal smiling with barely hidden pleasure as we dug into the feast of foods we would never get back in the capital. Overhearing smatterings of one lady whispering to another “I think they like…”, “Least we can..”, “whisper whisper…helped everyone…”. At least Sura and Arjuna got the drift and knew they would have been aghast if we decided to pay. Kinda proves the adage “on one size fits all and to hell with policies when realities are more relevant”.

It is that approach that has made us so much a part of the communities we work with and help. They have accepted us as part of them and we have accepted them as part of us. That is how good civil organizations work and we are quietly proud to be proven to be such by the very people with whom we work for their benefit.

The terrain was hard. Did we mention that before? On one day it was blustering winds and warmish air spiced with a few cups of tea (not sugar, we had had so much sugar from every household we visited that the GMSL had a blanket rule: pleeeease if you value our health, made the sweet optional). To some extent that approach has worked. On the next day it was muggy, humid, heated, sweaty and brutally bad from a thermal comfort perspective. On the third it was cooling winds raging and swirling around us so hard that they threatened to sweep us off our feet. That is Sri Lanka. That is the KCF. The entire environment changes within a few hours ride from point to point.

We sincerely hope that the team from ACTED got what they came for although we would have liked stronger and deeper bonding with our field work over the spread of the two years. Yet, most importantly, we did manage to cement friendships between our two teams and that is rare indeed. It is not often that “partners” remain either partners or friends by EoP. Most often, the hard bitten GMSL team knows that there are only two outcomes: Either partners become enemies or one partner makes the other a slave. We made sure that didn’t happen with our relationship with ACTED and we hope they think as we do that we can remain friends over extended periods of time so we thank Owen, Zeenas, Anjalee and Akshaya for a great time, good engagement and wonderful friendship. *Salute*