The Kandegama 87: They hate NGOs and welp… so do we! 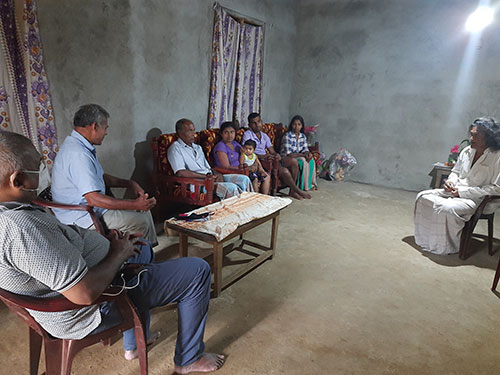 Dougie meets with individuals, families and communities in Kandegama to get to the actual reason why they are so suspicious of NGOs

We never shied away from calling a spade a spade. Yes, we do not like NGOs and by that, we mean the many hundreds of such be they communal, national or internationals who sell human suffering to alleviate their own. They are the worst going low-life on earth and if the reason for the continuity agony of people is because they are exploited, taken advantage of and taken for a ride by external entities from invaders to governments to businesses – well NGOVille? Please join that table of cheats in this social clubhouse we call civilization because there is no other place where we can seat you. When our field teams went from overarching observation to direct engagement at the deep community level in our field activities with 87 families in Kandegama, they became aware of a false note playing in the background. Some discord. Some disconnect. Some doubt. When that information was upstreamed to the GMSL leadership, Dougie immediately saw a problem that could land us all in social work purgatory if we were not there already.

So he rushed up to the site for a good old CID style tete-a-tete to get to the root of the problem. Oh the villagers were hemming and hawing, wishing and washing all down the line but then under that incessant probing they upped and said that NGOs has been among them like foxes among chickens, braying to the skies how much they want to protect them and ending up taking them for everything they could including all of the funds earmarked to help them become stronger – sans of course the cost of the humungous display boards that proved the fact they had done jack for these communities.

So Dougie put it to them: “Ah yes, we understand. You would be foolish not to doubt our motives as well”. He then explained that there would be no individual support provided to families, no special favours to anyone, no selective support or false signatures but that it would be collective with all support and assistance channeled via their own internal organizations and the only individual treatment at the level of households was to be the provision of seeds and training. The entire process of improving their own resilience would be theirs – and theirs alone. They would be the ones to determine if we were doing a good job or not.

And their frowns turned to hesitant smiles. Dougie had done it. A long ways still to go to gain their trust but certainly, it was a start. An issue never created by us could have easily jumped up and taken a chunk out of our own rear ends through no fault of our own if we had been less vigilant, less uncaring and less concerned about the outcomes of our work.

We suppose that the mutual dislike of NGOs between our teams and the 87 actually is a common ground on which we can meet.