Man! but deep drill engagement with communities does yield up some crazy scenarios. Here’s one that Amal initially identified and Dougie later unpacked in our forays into the field these last few days. 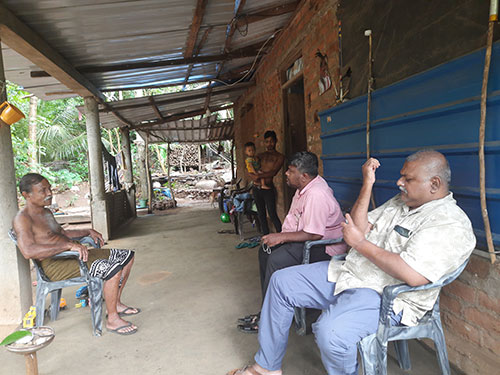 Tragic though the outcome and solved easily if the required care was taken in understanding community needs, the story we heard from the respected indigenous medial practitioner was just too crazy to have been concocted.

No one needs to give an indigenous medical practitioner herbs to plant unless the biota has become regionally extinct for one reason or another, the practitioner cannot procure it easily due to rarity or he is just too old to do the needed trek into the jungles to get it. Heenbanda Vedamahattaya from Narangamuwa certainly didn’t need planting material of any sort for any reason whatsoever. But that is exactly what some do good brigade of NGOs had done. They had come in, already armed with a formula from god knows where to start planting medical flora on his land. We believe that the reason was an activity line in whatever project they had obtained funds that said “plant 30 hectares with 50 species of medical herbs at selected locations in the Knuckles region” or something of the sort. They really didn’t give a hoot whether these people needed them or not. All they knew was that their remote controlled, rule-of-thumb, crackpot project design should be planted on the ground come hell or high water. And that WAS the problem. NO WATER. Lol. The poor doctor needed water not plants. He was quite capable of obtaining and planting if his water issue had been solved but where in their budget lines was that? So they stick living things and living seeds into the ground, take a few photos and go away happy that they have protected their jobs and have the photographs necessary to obtain more funds for similarly stupid efforts. The plants then proceeded to do what they were planted to do – they die. A 1000 liter tank and some pipes would have had Heenbanda Vedamahattaya well on his way but no. For NGOs, addressing perceived problems is more important than solving actual problems. We shake our heads.