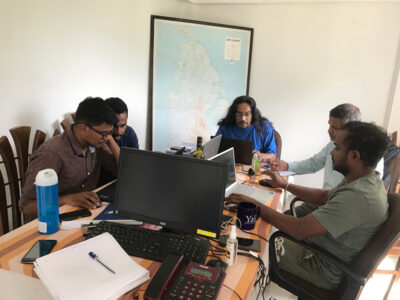 The researchers realizes that a river basin approach is the best

Woo bingo. The research team is back at the Hunnasgiriya office and traversing through satellite maps, terrain photographs and whatnot. As we were going through an arial view I realized that whatever damage was done was in and around the river valleys. Suddenly it all made sense. That was why the KCF looked like the Norwegian coastline. The protectionists had excluded the rivers from their um… high security zones… so to speak. Heh. Funny. These jokers who popped into those areas in this lifetime were attempting to claim ownership of that terrain while excluding those who had lived in the area for hundreds if not thousands of years. Therein I saw the reason why conservation failed in many instances. The people who have a right, a claim and a reason the preserve those areas were excluded so some nutjob from Colombo could go in and screw around “watching” things. Everyone knows that human beings not any other animal ever “looked at nature”. They bloody well used it. Used it well of course but used it. It was only with industry, ego, self-servitude that things went south. It was the very restrictions on life systems placed by well meaning idiots that created legal boundaries to areas where tradition had preserved things well that “illegal” activities were forced upon the people. So we decided, enough is enough. This way lies a compounding of already established madness. If these areas were to be preserved, it had to be done by the people who live in those areas not anyone else. If that was to be achieved, we had to treat the entire basin of a river and not the unnatural cleavage of GNs and HHs. And so! That is how we will execute COLIBRI. Across entire river basins and not, as we had naively indicated, by addressing administrative boundaries. We could certainly have done the easy and ducked the question entirely but that is not the way of the Greens. We do what we must not what we can. We do what is right not what is convenient. Although (lop sided grin), I wish I had the moral turpitude to casually look the other way, do the simple thing, pound out the indicators, highlight some best practice or three and when things die as they surely would, extract an immoral dignity by hiding behind the phrase “lessons learned”. But I can’t. Nor can the greens. Phew! We have our work cut out.