Transboundary water conflicts: Claiming ownership of something that never belonged to anyone

“How does one hate a country, or love one? Tibe talks about it; I lack the trick of it. I know people, I know towns, farms, hills and rivers and rocks, I know how the sun at sunset in autumn falls on the side of a certain plowland in the hills; but what is the sense of giving a boundary to all that, of giving it a name and ceasing to love where the name ceases to apply? What is love of one’s country; is it hate of one’s uncountry? Then it’s not a good thing. Is it simply self-love? That’s a good thing, but one mustn’t make a virtue of it, or a profession… Insofar as I love life, I love the hills around me, but that sort of love does not have a boundary-line of hate. And beyond that, I am ignorant, I hope.” – Ursula K. LeGuin – The Left Hand of Darkness

That quote read for the first time when I was 13 is my favourite from a science fiction writer and a nice segue into this little musing. How indeed can one look at nature and think, “this part of it is mine and that part of it is yours?” How can one state “I love my part and hate your part?” “How can one claim “I won’t touch your part if you won’t touch my part?” Nature had never worked in that way and never will. The expansion and contraction of its phenomena are driven by an order that humans have always had a problem with simply because our desire to cleave things to self clashes with nature’s desire to unify things to every being. Our desire to wish ourselves at the center of everything clashes with Nature’s desire to see everything at the center of everything. Our desire to unbalance things conflicts with nature’s desire to balance things.

It is nevertheless, the way most humans think. It is the way they say and the way they do and they will feel very uncomfortable indeed if they cannot claim ownership of some piece of nature in order to convince themselves that they belong to it. And so, we have given ourselves towns and districts, provinces and states, nations and continents as segmented parcels of physical space so that we can state with joy and pride, “this is mine, I belong here”.

Still, we may be able to live within this foolishness but for a massive problem related to what I choose to call “large swath commons” that are vital for the existence of every sentient being on the planet. These are natural phenomena that refuse to fit into our societal parcelling. Forests that straddle multiple nations, rivers that flow across continents, air that swirls around the world. The minute we created our little ownership spaces, we also created a mighty big problem in the use of things that refuse to be limited by those spaces.

We have managed to some extent to deal with tree cover because it is stationary and may be thought of as belonging to a nation. So too, we have come to “I just bit into a lime” kinda terms with air by simply saying, “the stuff is all over the darn place, we cannot control its movement therefore we cannot own it so…ugh… there is precious little we can do if one set of nutcases poisons it and another set of people are sickened by the pollution so… grr…let’s just look the other way”. We cannot do either of those with rivers because they flow from one part of the world to another part of the world through limited, well defined channels. The fact that rivers are self-limiting in their movement makes us feel sufficiently able to want to control its ownership. We feel that we have a chance to claim that “this water is ours” while it is still flowing within our own ownership boundaries be those boundaries groups, communities, villages, towns, districts, provinces, states or nations. We can believe that we can store all of it, we can drink all of it, we can irrigate land with all of it. In short, we can prevent its use by those living in geographies it flows into. In shorter short, we think it can be dammed and owned and let the rest be damned and disowned.

Now we have COP 27 where one of the commencement roundtables was, in large part about this very problem. It urges cooperation between those who have to deal with transnational, transcontinental flowing water bodies. Much debate and dialogue ensued but I don’t know how actionable all of that sweet talk is. I think people are too far gone down this road of owning things to have the first clue how to go about it because all they have to work with our mad-made man-made instruments such as laws, covenants, conventions and commitments all of which have to do with external bodies regulating very personally important things. 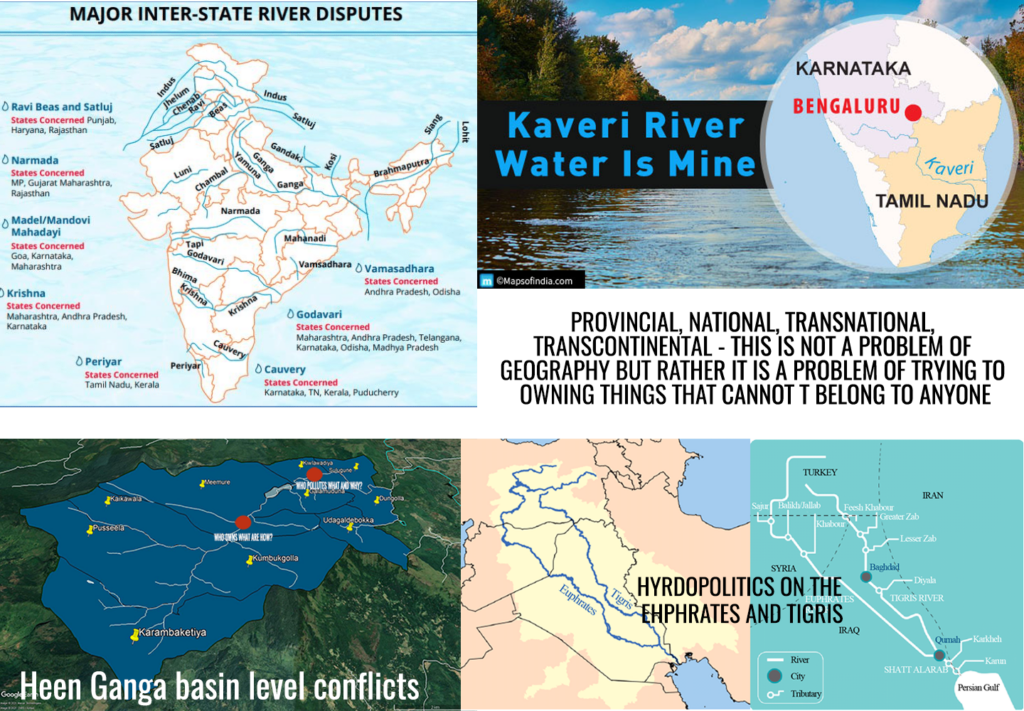 Regardless of size, these conflicts all have a few things in common

Every individual in society who uses sometime nature gives must mandatorily, non-negotiably make sure that only what is absolutely necessary at that moment in time is used and that everything in excess that is not used is left in pristine condition for every other being to use.

It is a truism surely. But not for those who want to give excuses for taking more than they want saying “I need this for electricity, for irrigation, for drinking, for powering my fizzy drink business, for lubricating my processed foods enterprise”. Ha! What they are actually saying is this: “I am so full of the desire to make sure this water is mine in order to feed the wasteful life I lead so that I can keep up with global, continental, national, provincial, communal joneses that I do not give a tiny rat’s ass whose desperate need for a few bits of this or that I violate. I.I.I. Me.My.Mine.Myself. UGH!

There is a reason why our peopled world that is driven by selfish motives has tried its best to forget that fundamental custom. It is because it is anathema to greed, covetousness and ownership. Therefore, it is a no-brainer that it had to be cauterized from our very souls. That effort over the last 80 years has succeeded to a large extent. That is why we have our nations, our provinces, and our itty bitty ideas of who owns what and how much of it for a fleeting moment/month/millennium. That is why we have such trouble trying to come to terms with that fundamental commonality of large swath commons because we have been told so persuasively, so pervasively, so brutally to ignore it. That is why every externally regulated action from agreements to sanctions on the fair use of commons will fail – sooner rather than later. Regardless of who we think we are, we, going down this route of covetousness will become but shadows. Swept away on that greatest of moving rivers – time – forever.

Yet it is tough for most to recognize, espouse, believe and act with the understanding that the need of the other is greater than one’s own. Let alone being empowered by that stance, most would feel vulnerable and threatened by it.

However, hope is not lost.

Among the many animals, demons and hell-beings inhabiting human frames there are a few million who are truly human. Be it the issues related to communities living along a tiny stream or a transcontinental river, they know what it takes to preserve it for everyone’s good. In such as these, there is redemption for the world. They never need to “win” a “battle” for water although they may be thought of as “warriors in water wars”. In this effort mind you, there cannot be dark deeds done. In this, there is no space or place for evil. In this, there is no need for anger.

Trust me folks, those who work for water-equity would be aghast at the very idea that they are in a conflict of any sort. They are simply wondering why everyone else doesn’t get what they get and they are simply trying to get everyone to see – not fight – or litigate – or agree – or compromise.

They are those who know full well that SDG 15, or, life on earth cannot be unless we are capable of migrating from that to lives on earth. They are our collective hope although for most, driven by their enforced marginalization of everything that is not part of their next two minutes, that type of pseudo-philosophical, crazily practical, intensely enabled, fundamentally selfless group are crackpots and nutjobs.

They are those who do not wonder where their next fuck is coming from. Nor how unsatisfying their past fucks have been. Nor how bad their personal fuckups are. Nor frightened by the fact that they never screwed anyone for an instantaneous, short lived, soon-to-be-forgotten personal gratification.

They are those who carry a burden on behalf of every sentient being on earth. Sometimes, they must share that burden with those who would rather not want a piece of it. Those are the conference gooks of the world. The outcomes of such sharing are fraught with uncertainty because a burden shared may be halved or doubled depending on the heart and mind that received it.

Yet, again I say, I have hope in these women and men and folks? That hope is never mere. Even when it is meagre. When all other senses sleep, the eye of hope is first to awaken, the last to shut.