I wrote a couple of years ago that Sri Lanka’s public debt has resulted in every Sri Lankan citizen being indebted to the tune of Rs.200,000. Sure sure, the per capita income of Sri Lankans from a statistical perspective is rocketing upwards, so much so that we are now supposed to be a middle income country. Let us casually ignore the fact that the large majority of poor live in abject poverty and that the small minority if rich live in fabulous opulence. The nation is in impossible debt compared against its Purchase Power Parity (PPP). Well, it seems as if other nations are far worse off than we are.

Lets do a bit of comparing shall we?

How much money do we have in the world? Well, even guesstimates vary on this but,  we currently have about 5 trillion dollars of physical cash and approximately 25 trillion dollars in “dits and dots” – checking accounts which can be quickly accessed. Forgetting about vague money such as money market funds and long term deposits and adding savings and deposits less than 100,000 dollars, we have about 60 trillion of enabled cash across the world. That’s about it. Nothing more that is useable. Nothing. 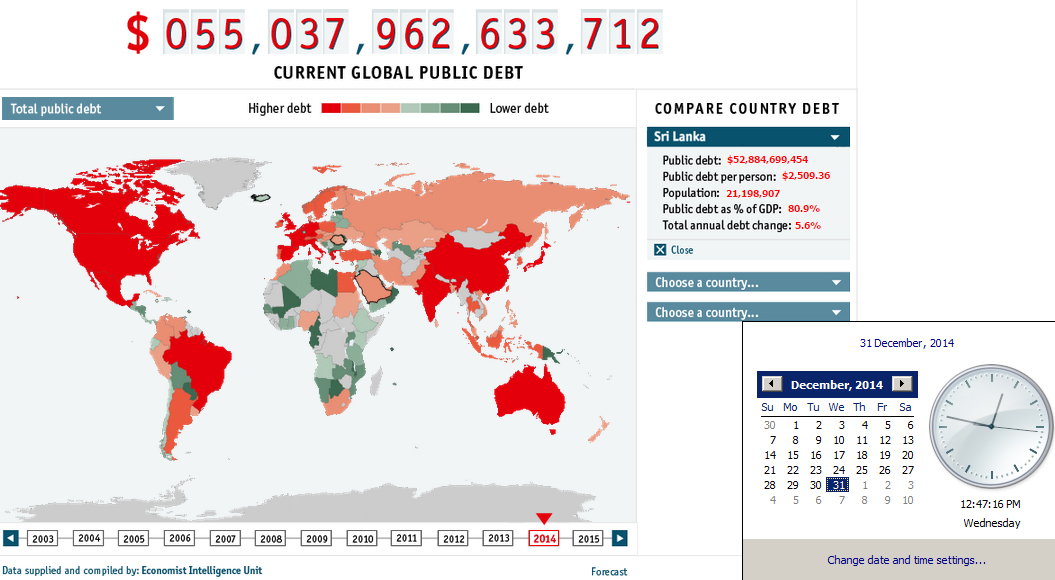 What does that mean? lol. Well, it simply means that we are in debt to 91% of the total available funds in the world. Within a year, we will jump that limit and be truly spending more than we have – unless of course, we try to mint ourselves out of trouble, do as Zimbabwe did and end up as Zimbabwe did. Except that we wont have a dollar or a South African rand to save us.

Sri Lanka is in debt to the tune of USD 55 billion and per capita debt is USD 2,500. Terrible eh?

Here’s how Sri Lanka compares to other nations: You can see a “popularly debt ridden country” in Greece and the rest of the “popularly stronger countries” in the table.

Bottom line? We are staggering under debt, and we feel it. The rest of the world in being mowed under it but doesn’t give a dime (save Africa… funny? not at all, but, lol, anyway). The reason they give for saying Japan or Singapore is “cool” and we are “uncool” is because of some weird-assed metric that says they have “better fiscal management”, “have the capability to repay”, “earned the trust of creditors” and such la-di-dah. Well, when sub-prime mortgages failed in the USA and I daresay, leveraged investments in China will fail pretty soon if they don’t watch it, everyone knew that the “trust” developed by highly indebted nations were a Chimera – a manufactured dream. It only needed the failure of broadbased nuclear debt to fail for the whole darn pack of cards to come crashing down. So, good people, while we earnestly prattle on about wealth creation, we are all – without exception – only capable of debt creation. In that it is not just Sri Lanka but everyone else who is doing terribly.

The world is insane. The so-called “developed” countries, especially so.