If you are not dead already you should be

So, you are fairly well to do. You commute daily to your great job or your profitable business. You return each day to a stable family. You take a vacation every few months. You own a few acres and couple of houses and a car or three. You go often to the bank to make a deposit to an already fairly fat nest egg. It’s a great, solid, decent, socially mandated routine and you are probably thinking you do well in terms of the societal norms by which you live. Society probably considers you a smart man and you probably believe that yourself.

Oh, and by the way, you also complete that routine by becoming sick five times a year, going in for a checkup every six months with your spouse in attendance and taking a sick child to this OPD or that battery of specialists every month for treatment for a cocktail of illnesses.  Your kitchen cabinet resembles a mini-pharmacy. You hammer the well-woman clinic, the hair-loss treatment clinic, a dozen deals that come couched in health check-up packages from diabetes to prostrate to toe-nails, every next advert claiming that you can be saved if you gulp this, pop that or chomp the other thing.

You are one of a whole host of upper-middle class citizens of this country that believes, religiously, blindly, that your life is great despite every indication to the contrary. You believe you are doing alright with your diabetes, your hypertension, and your clogged arteries.

You think that chronic kidney disease is something that affects poor rural farmers who live surrounded by a fog of toxic agrochemicals. You have no clue that a full 10-15 percent of the population of Sri Lanka will be subject to serious renal disease by 2025 and that you, thirty-something now will probably be having dialysis at forty-something

You have no idea why your wife had to suffer so much to give birth to a child and had to go visit a doctor fourteen times during pregnancy or why your child needs every kind of shot, pill and pop imaginable just to keep it breathing over its first five years. You haven’t figured out why most women are half dead by the time they have a single child these days and you have no clue why you have penile dysfunction at thirty. You do not wonder that each time you go to a hospital there are, literally thousands of others crowding in, pushing you out and jostling for position. You have no need to understand why the fastest growing and most profitable business sector in Sri Lanka is the health sector.  You think this is the norm when you are being told by your dad that in his day, he visited the doctor maybe once a decade and even then, there were just a couple of others in the waiting room with him. You have no idea how much of your productivity is lost to your little stash of diseases. You have no idea why in the past, people were cured by medicine but now, they are forced into chronic use of drugs simply to keep you going and going in a twilight existence while buying and buying “controllers”.

You are no better and no worse than the low income groups and the middle income groups and you differ in just one way – you have the wherewithal to somehow justify the belief that your shortened, diseased life is somehow great.  You believe that your ability to check into a five star hotel masquerading as a hospital is enough to validate the various diseases you need treatment for. When you buy into the various advertisements calling you to splurge on this insurance and that policy, this vitamin or that energy booster, you erroneously believe that by doing so you can live just a bit longer than anyone else. 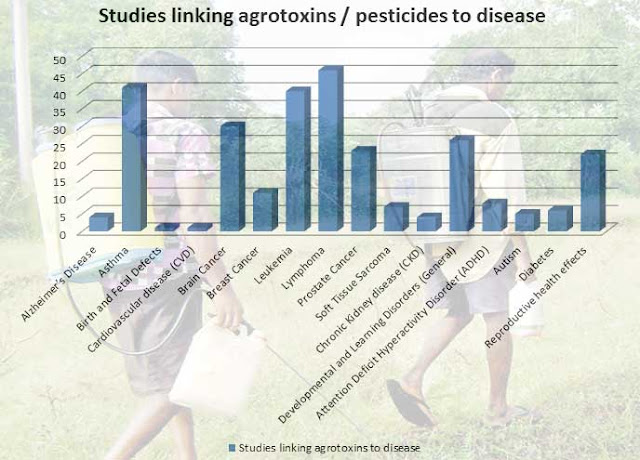 Who are you?
You are a person who doesn’t know that the incidence of agrotoxins in your food is at levels that will kill you just as surely as the farmer who is exposed to 100 times that amount.  You have no idea that early onset Alzheimer’s is an urban ill linked to the ingestion of those poisons. You do not know why there are so many special needs units popping up to treat ADHD whose incidence jumps 10 times in children  exposed to organophosphates which you end up feeding your children through the foods you purchase. You have no idea that leukemia accounts for 33% of all childhood cancers and that agrotoxins are a key reason for it and that your child is vulnerable to it even before it is born. You do not know that in certain parts of the world, especially developed countries or those urban centers in developing countries that are significantly developed (like Colombo) 1 in every 8 women will succumb to breast cancer linked to agrotoxins. You just don’t understand that pesticides and insecticides are the reason why so many of our children are suffering from asthma and your child probably does as well.
Who are you?
You are a person who visits the supermarket at least twice a week to buy a few of the 40+ agrotoxin laced poison packets also known as the fruit, vegetables, meat and fish section despite the fact that Sri Lanka has over 550 natural foods that don’t have to be labeled “poisonous! Handle with care”. You are a person who doesn’t care a tiny rat’s rear why there are just two aisles of food and seven aisles of “nutrients” and that those rows and rows of nutrient cans, boxes, packets and wraps only serve to concentrate the toxins already existent in their sources coupled with a chemistry lab full of other poisons just to keep them looking and tasting like food for a long long period of time. You are a person who doesn’t wonder why not even a maggot will touch the contents of a “nutrient rich” package if you toss it out and watch it until it degenerates into dust.
Who are you?
You are a person who believes that something marketed well is better than something that is not. You are a person who will trample a naturally created jak-fruit seed on your way to a supermarket to buy a kilo of toxin laced dhal. You are a person who reads the nutrient list on a package to see if it will solve an imaginary disease marketed for you by a nice looking chick on TV. You are a person who just doesn’t think that natural foods can be had for either low cost or no cost because it is too easy to access and too difficult to market as part of your “wealth display” or your “knowledge  display”.
What are you?
You are dumb. And the dumb die. Sooner rather than later. Despite your social status. Despite your supposed wealth and wherewithal. Despite your lands and your buildings. Despite your insurance policies. Despite your acceptance by society as a “smart” person. If you are not a ghost parked on top of a hospital roof or supermarket display while reading this post, you are already dying.
You know it, and you are just too darn stupid to realize why that is so.
Share Post: