Annihilation through war or weather: Take your pick

If World War III don’t get ya, Climate Change certainly will

The world has lost its senses as well all know. You thought I was talking about Ukraine eh? Well yes that too but no, the latest report from the IPCC, that of Working Group II came out a few days ago and it proves that we have lost our minds in more ways than one and that responses to the climate crisis may be far more difficult than the response to war. In both instances, mal-responses could very well lead to literally consuming all of us in ungovernable blasts of heat.

None of the outcomes of belligerence are new friends. We clearly saw the writing on the wall with Ukraine back in 2016. So too we see it marked for the South China seas. So too we might well see it writ in the storms of the Western Atlantic. Feeding on doubt and suspicion, our world on the brink of flame, our animalistic reactive responses to threats means just one thing: we learned zip from our histories.

None of the outcomes of stupidity are new friends. We clearly saw the writing on the wall for global climate back in 1992. We saw it underscored in three iterations of talks. Feeding on greed and excess, our world on the brink of being seared by global heat, our animalistic reactive responses to threats means just one thing: We learned zip from our histories.

In both war and weather, pure science has repeatedly told us how we are murdering ourselves. Social sciences give us the doomsday scenarios of ignoring the pure sciences. That second is what the AR6:WG2 report is all about. First, for crying out loud, just #$%^#$%&#%^& READ IT! Each one of us losers live as if the only person who lives in the world is herself. That his idea is the only idea and it need not be based on any other idea. That her action is the only action and need not either depend or be built on those of others. Integrate those individual takes on a time function from t=1945 to t=now and what we have is a fired earth that is being done to a crisp by the only thing we have recently been really good at: The ability to stuff ourselves up ourselves.

Let’s just take the climate thing here since the war thing is being done to global death (pun intended) already. What does WGII which looks at impacts say?

Everything bad gets worse because of CC 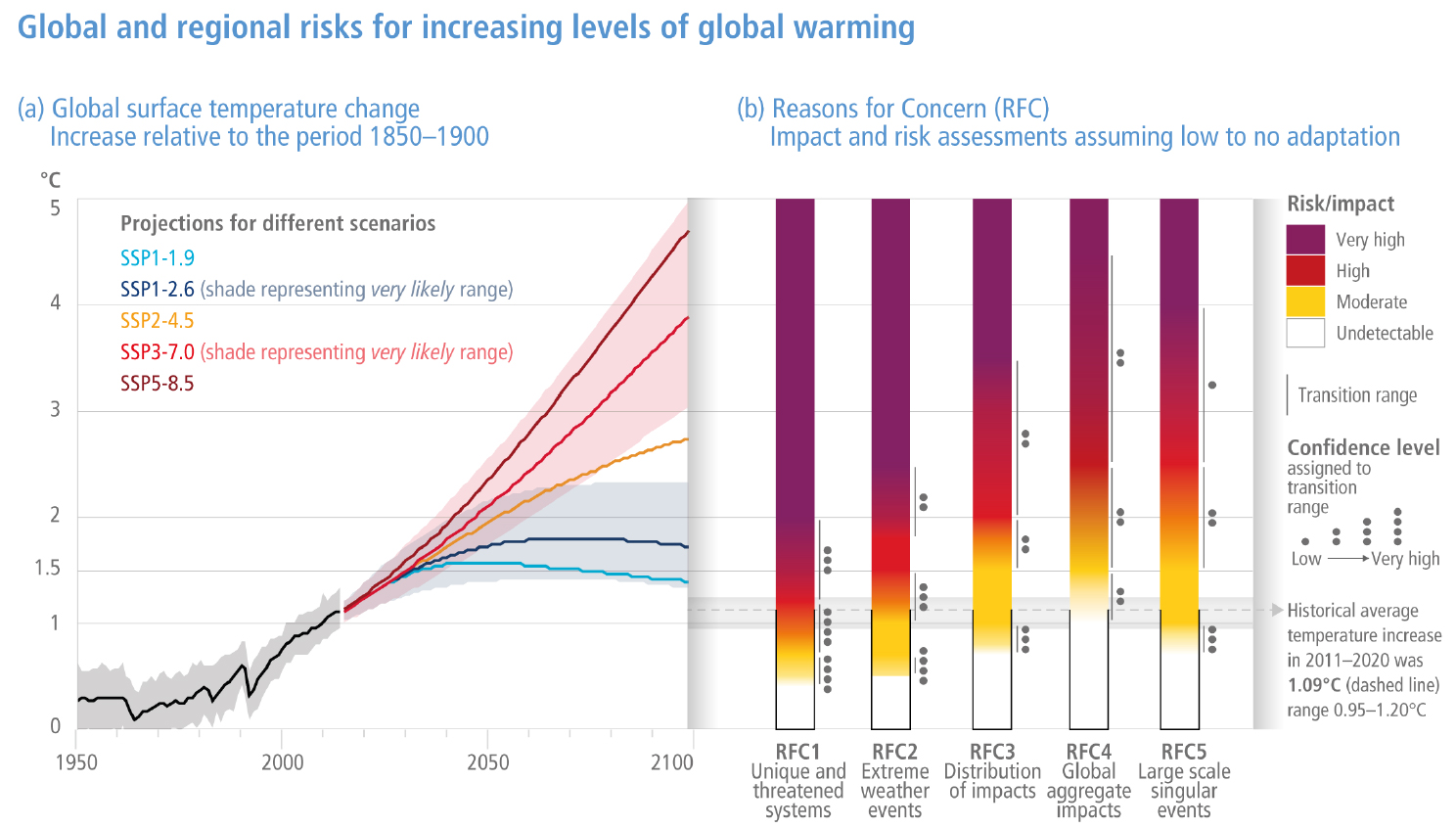 The policymakers’ version has a dark diagram that tells us in no uncertain terms that under various Shared Socioeconomic Pathways (SSP) scenarios. In English, SSP translates into the level to which we wish to screw ourselves up as collectives, societies and nations where SSP1 scenarios means we are doing the best we can to unscrew ourselves while SSP5 means we will do what we always did best and cook ourselves into oblivion. We see that if we continue down the path we are on right now, everything gets into the purple regions pretty quickly. I don’t think any of us are even remotely ready to get down and do things about it, choosing to keep discussing and creating reports that will either never be read or get tossed in with the rest of never read but life critical material. We will go our animal route, make our decisions based on where the next buck, fuck or food is going to come from and die. In the process we will use the most creative ways to prove that we are doing everything we can when we are actually doing jak and label what we do badly so that it can be pigeonholed and forgotten except in discussions. And that brings me to our habit of creating new and improved labeling for things we cannot or do not want to address as well as we should. We got one of those mainstreamed through this new report from the IPCC.

Maladaptation! It’s been around for a while but it got a bit more traction with AR6:WW2. I kinda like this one. It speaks of something we’ve been doing badly like forever simply to hoodwink people into thinking we are doing something, anything. The intent here is to create excuses for bad behavior. Sch maladapts have the opposite effect to the one intended or claimed simply because they are moves made to deflect people from skewering mal-adjusted human beings doing dirty things to the planet. These types of activities simply try to kick the can down the road while keeping the global human consciousness from biting chunks off the bums of mostly animalistic humans hell-bent (pun intended) on continuing to do their thing at cost to everything. At least that is how I like to interpret it. In general, in adapting to CC, we can do things that help or hurt. Based on who is doing what with what, tools can be the same but the impact of their use diametrically opposite to one another. That should lead everyone to think about what is best for them and how it can create lasting positive impact and not try to supplant something from somewhere else and hope that it grows. WG2 screams at us to understand that coasts will erode, ice-communities will disappear, species will kick their little heals in the air and go to their specific hells or heavens if we continue to try to win individual throws in a game where the collective lot of throws of all players will eventually create a cacophony of dice hitting each other. That noise will be the death knell of a world that was controlled by a species too dumb to realize that this is not a game of chance based on what “I can get as an individual” but a game of choice based on what “We can do together”.